Typical day on the ranch, beginning with our regular salt water guys and an oil truck or 2 and Robbie, the gauger. Just as Robbie finished filling me in on the dangers of havalinas (he said they attack barking dogs), illegals (if they’re drug runners, they’ll attack anything) and the rattlesnakes (you start seeing them more in March, about 1 per mile), 10 Perterbuilts pulled up to the gate. This caused a significant traffic jam as they trailed a half a mile back down the road. They sat patiently for over an hour, trying to find out if they were at the right gate. 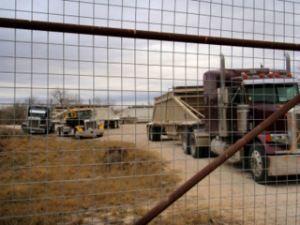 As usual, I had no idea. It’s like being held hostage (movie style) where you just keep repeating your tag number. In the meantime, Heidi had driven into Tilden to meet the Direct TV installation guy. 90 minutes later, they squeezed their way past the caravan, both shaking their heads as they pulled in. The company had sent the wrong kind of satellite for a rolling home. The young man, who kept apologizing for his English (lack of) was frustrated after missing Tilden and driving all the way to Mexico and back to find us. 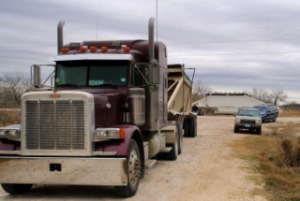 It appears, of course we’re not sure, that things are winding down at this gate. They took the lights and the Port-a-Johns out last night and the suction floats today, so we’re thinking we may be moved soon. Robbie’s description of leaving a gate sounds more like a Tsunami evacuation. They say you’re shut down and you need to be ready to roll. It’s a small dilemma, to pack or not to pack. We may be here another day or another month.

Regardless, the TV’s on hold. Heidi doesn’t like it anyway and I’m getting a lot more reading done. J  Back to the Peterbuilts: turns out they were at the right gate, twice! Richard, the one of the head ranchers drove up in a dune buggy and let them in to dump 40 tons of rock around the lake for the birds.
Really? “Mr. Stuart has a lot of money.” When there nothing else to say, just state the obvious. Although I saw them dump the rocks, I couldn’t find hardly any later. I think they must have dumped most of the 40 tons in the lake for the underwater birds. 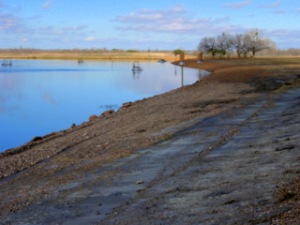 The cattle have strayed to our gate again, which is a problem for the ranchers. So today is round up day as the stragglers will be herded back to their appropriate location. Finally something that sounds like a Western! But no, they won’t be using cowboys. Cowboys run $75 a day and it’s another $100 a day for the horse (I thought they came in sets). It would take quite a few cowboys and horses to accomplish the task. A helicopter, on the other hand, is only $200 an hour and can get the job done in less than 2 hours! So we’re having a round-up, helicopter style. 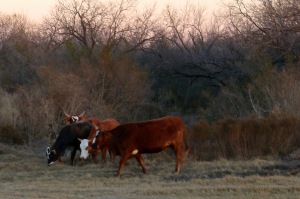 Heidi is in (you guessed it) Pleasanton at Radio Shack buying an AC adapter for the DC adapter I picked up yesterday. No idea if it will get us on line or not or if we’ll even need it next week if we are relocated. Speaking of next week, I was able to get a little more insight into our future from Raul, but unfortunately, I don’t know what it was.

Going to school in Indiana in the 70’s, I saw as little value in my 2 years of high school and 2 years of college Spanish as I did in the Chemistry and Calculus classes I took because the guidance counselor insisted. While the latter 2 still lack application for me, I wish I‘d applied myself in Spanish class. Everything I remember about Spanish now, I learned from Doris Day but at least it’s appropriate: Que sera sera…

4 thoughts on “Helicoptors VS Cowboys”