Home » Gate Guarding » Muddy The Waters, The Dog, The Life

There’s nothing difficult about the gate job, but today was a bad day to be busy. Our Keen sandals that were so perfect in Oregon just aren’t quite the ticket here. My feet feel vulnerable to random acts of biting and stinging from low lying things and they certainly aren’t designed to carry one across waves of mud.

Larry came by to check on us and said there’s another semi up the road, stuck up to it’s axels. He also mentioned the need for boots which apparently we can get at the Tractor and Implement Store in Pleasanton where I was yesterday.  WalMart doesn’t have any.

This is the 5 straight day of rain. We’ve had a semi get stuck at the small lodge well behind the RV. 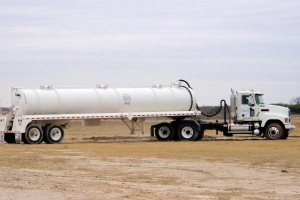 This afternoon we had a water tanker that didn’t make the usual 1 hour return run. I‘ve never seen a semi-tow-truck before!

I took a picture of the unstuck driver on the way out but he wasn’t too pleased, saying: “Aww, what’d doing taking a picture for, anyway.” I tried to holler back a blogging answer which he couldn’t here over his diesel and probably wouldn’t have appreciated.

As an alternative to giving Henry baths every day, I pack him under my arm like a football and walk him to the least mucky/ least snaky spot I can find and we pace an area about 15 yards in length for 20 minutes! He’s always a good sport and certainly has a better will be happy to do anything that avoids extra showers.