Debbie and I started taking our seminars on the road before GPS was as reliable as it is now. We both love traveling but share equally in our struggle with maps. When we were in the green Camry tooling across the Midwest on the way from one small state to the another, we frequently would be lost. It took more than one trip around St Paul and Minneapolis to realize I’d never understand the highway signs. I also never was really able to understand how to correlate the maps with the road signs satisfactorily. There’s the key, I’m told.

That meant we stopped a lot. Talking worked a lot better for us than mapping ever did. We were communications trainers, after all, not schematics scholars. We slowly developed a method for arriving at our sessions without being too stressed. 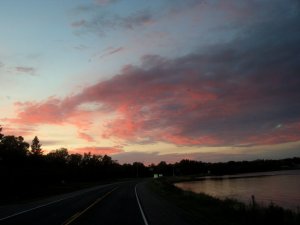 Rule # 1: Never hesitate to ask for directions. Being women, we didn’t have any qualms or arguments about asking for help. Usually I would give up before Debbie did. I feel so out of control when I don’t know where I’m going. Getting nowhere fast doesn’t make me feel any better. Frankly, when I insisted on stopping and Debbie wasn’t uncomfortable yet with waiting to see if our destination was around the next turn, she was usually right. We called it my Almost There Syndrome. Usually it was only a block or two away.

Rule # 2: Enjoy the journey. We stopped to shop, eat and enjoy the local color. You know how some people want to get into the seat, buckle down and only stop for gas? Not us. Sometimes we would meander down side roads and get turned around and head out-of-town the wrong way. One time we realized were going into the wrong town right about when we were due to arrive for class 60 miles the other way. That was the only time we ever were late for a presentation. That led to the third rule.

Rule # 3: Always arrive a day early. We’ve driven in fog, white-outs, blizzards, tornado watches and flood warnings. We’ve had flat tires, run out of gas, had billfolds stolen, left purses in cafes, department stores and restrooms. The only solution for us was to be sure we were ahead of time so that there was less chance of not making it due to circumstances. 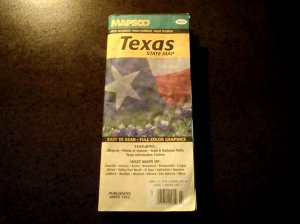 Nowadays, with the RV, we stick to the same rules, except that we don’t stop very often because—well you know, it’s hard to park an RV and just jump out to get directions! We plot our trips the night before, or Debbie uses the computer to map us as we go.

We use the air card and a laptop to chart our course. I see no need to struggle with paper directions in the form of maps.

She bought a Texas map when we arrived. Makes me cringe to look at it.