The first week of February, 2011 was also the week the temperatures in Shiner dipped into the mid-teens. We set the furnace at 60, afraid we’d run out of propane since we weren’t very portable. Henry and I stayed swathed in blankets at night as the freezing air seeped in through invisible cracks and crevices. We coped pretty well for the first 2 days.

This was a record-breaking cold. Schools went from rolling brown-outs to closing all over southern Texas. Folks from across the nation worried that they wouldn’t able to make it to Dallas to claim their $4500 scalped tickets for the Super Bowl.

We had our own bowl issues. We’d disconnected the outside hose to our water supply since we knew it would freeze right away. We carefully monitored both sinks every 30 minutes, keeping a slow drip going. I had no idea how quickly slow dripping  can empty an entire RV water reservoir.

The third night, I unwound  from the blanket, paused the DVR, and then I heard it: the Sounds of Silence.  The kitchen faucet wasn’t dripping. My fear was confirmed when I couldn’t get any water from Bad, Bad Leroy Brown either. BBLB was the name of the bathroom sink. Heidi stuck a BAD label on it so I’d quit brushing my teeth with the non-drinkable, bad tasting and you don’t know where it’s been, potable water. I named the sink Bad, Bad Leroy Brown because I started humming the tune every time I reached for my toothbrush.

I didn’t name any of the appliances, although Mr. Coffee, which came named, was next on my list of problematic necessities. Coffee is my friend. On that cold, cold night, Mr Coffee began tripping breakers, no matter where I plugged it in: on the counter where it belongs, awkwardly placed under the dinette etc… I eventually disconnected the bell and perked a pot outside while watching for monster trucks and white pickups through the icy window. 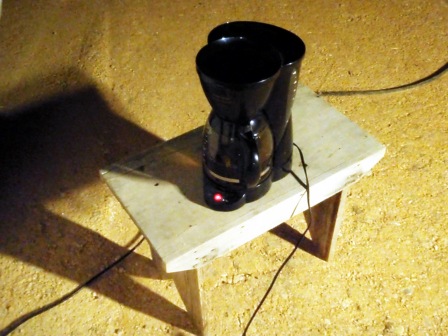 Back to bowls: the real crisis was the toilet bowl. The automatic septic pump was no longer automated. Apparently there was bit of a dam somewhere in the sewer line so the restroom had to be closed for thawing.

The rest of the story remains a bit of a mystery to me. Of the two of us, I’m much, much more easily embarrassed than Heidi.  But for some reason, that I can no longer recall, (maybe I lost in Rock, Paper, Scissors – I never did really get that game) it was determined that I should go to the nearest Walmart (Gonzales) in search of a temporary solution. Heidi suggested I buy a 5 gallon bucket. The only 5 gallon bucket I could find included the cement, so I wandered the isles. I knew the blue plastic pail for $1.50 couldn’t possibly handle the stress. The bait buckets had holes. The trash cans looked sturdy enough but the logistics were insurmountable.

The store was teaming with frozen shoppers when I finally found my solution.

I was pleasantly surprised to find they had a fairly wide variety of acceptable planters.  I checked the bottom for holes and for weight restrictions, but all I found was a drowning warning. I felt confident there was no danger of falling in.

I’ve accidentally done a number of things that drew quite a lot of embarrassing attention to myself (fallen off the stage in front of hundreds of people, left the convention for the restroom with my cordless mike still on etc…). But that cold, cold day in southern Texas, I was a woman on a mission. I was shameless.

As shoppers streamed by, I lined the 5 most promising planters up in a row and plopped myself in each pot until I found just the right one.  The funny part was, no one paid any attention to me. It was as if they saw people sitting in the aisle in flower pots all the time!

In the Express line, the clerk smiled at me and said:
We’ve sold out of gloves and space heaters and drinking water today, but you’re the first one to buy a flower pot!
For some reason I felt compelled to explain my predicament.
She nodded and  smiled and said:
This surely is some crazy weather. We had to bring our chickens inside.
Oh gosh, how many chickens do you have?
25!
Wow! That must be quite a cacophony!
She handed me my pot.
Sure is Sugar, especially with the 3 Chihuahuas!

That added some perspective. For almost two weeks, we didn’t have any water or bathroom facilities . We couldn’t shower or do dishes (the dirty dishes were moved to temporary storage in the shower) or keep the breakers from tripping. I didn’t have much heat at night and apparently even less pride, but I also didn’t have 25 chickens and 3 Chihuahuas!

My embarrassment was short-lived and limited to Walmart. Heidi, on the other hand (she must have lost Rock, Paper, Scissors the second time) had to carry the flower pot to the guys outside Port-a-Potty every day for 2 weeks to dump it.

When we bought the 5th wheel in September, a major criteria was The Arctic Package. It was interesting, explaining to our Iowa dealership why we needed an arctic package to live in Texas.

We still have the flower pot –  just in case –  it’s such a perfect fit!