Lately, I’ve started dressing like Steve Jobs. I have no idea why. I work at night, so it may not be my wisest decision. Of course, I don’t wear the turtleneck. I do live in Texas.

Maybe I’ve taken to wearing all black because I don’t like making decisions? It could that after a year and a half of living in the South, I’m channeling Johnny Cash, who was the original Man in Black.

I own 2 pairs of jeans. I guess I’m saving the blue ones for special occasions and laundry days. Every non-laundry day, I don my black jeans and black t-shirt and black tennis shoes (with the glow in the dark, trim).

It’s always the badly dressed people who are the most interesting.  ~Jean Paul Gaultier

I’ve even switched to black earrings. They’re bigger, but blendier, so I’m not sure they’ll be any easier to find, but they’d be impossible to swallow! 😀 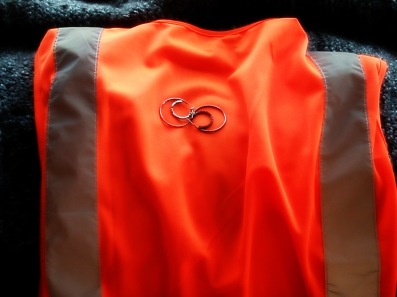 I have a lot of traffic at night these days. I maybe should rethink my wardrobe (I do have 3 other t-shirts to choose from). It’s possible that black isn’t the best idea when you have 100 ton trucks barreling at you in the dark.

Some barrel. Then there are some, like Steven, who works for Cajun Water Services. He came in so slowly that I had time to brush my teeth between the bell and his arrival. And, he apologized for kicking up so much dust. Nice guy. He’s a cloner! Don’t we wish! 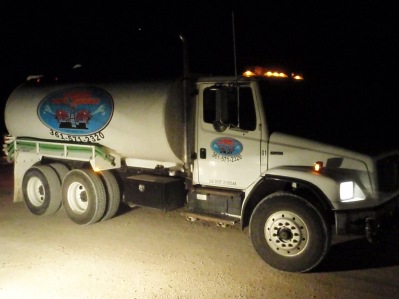 Mark Twain worries me. I don’t know whether to take comfort in this or not?

Clothes make the man.  Naked people have little or no influence on society.  ~Mark Twain

This quote came to mind because of the story Frank (not his real name just in case this gets him in trouble) told me last night. Frank got lost sometime between 2-3 a.m. He pulled up to the gate and waited… and waited. According to him, not only was the gate guard sleeping on the job, she apparently had done quite a bit of imbibing to carry her into dream land. I don’t know which company she works for. All I know is that if that’s the norm, she definitely should wear something, but probably not all black.

At least when my seemingly disembodied greying head, floats out to the road above the my bright orange vest, I know I’m there. 😉