Home » Gate Guarding » That was then…

The move, which was scheduled for Tuesday and changed to Thursday, took place on Wednesday. We’re still on the same ranch, between Yoakum (population 5400) and Cuero (population 6500).

In our auspicious career as gate guards, we’d only worked with two companies. We spent almost a year following a rig with an oil company until they stacked last November. We subbed for a vacationing couple for two months.

Now, we’re once again following a rig and so is the caliche with another company.

For those of you who aren’t a part of the gate guarding community (which isn’t remotely like a gated community) there are a variety of jobs. Working with a drilling rig is all that we’ve done, with the exception of our first 3 1/2 weeks, guarding a water tank in Tilden.

If you’re assigned to a drilling rig, you stay with them through one hole. Some folks stay on location from drilling through fracing. Some follow the rig. Following the rig isn’t a given. If the Company Man (Men) like you, they may ask you to stay with them when they finish drilling and move to the next site. If you like them, you may want to go. If it isn’t a good match, the rig moves on and the gate guards go back to the yard to wait for another assignment.

This is our second hole with 441. It seems like it’s going to be a good match. At the first gate, we were about a mile from the site. 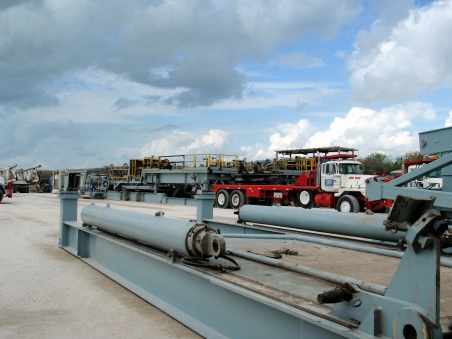 We couldn’t see the rig, even at night, through the tangle of mesquite. I drove back once to pick up dinner. I went into the Safety Trailer by mistake, but I guess if you’re going to go in the wrong trailer on an oil rig, the Safety Trailer is probably the best one to stumble into. 😀

We’re on a 200 acre ranch that has multiple activities going on. Being on the gate, on the highway, meant we handled the traffic for all 6 sites. It was crazy busy. I was really happy it was March instead of July!

For 5 weeks it was kind of like those videos you see of traffic cops standing in the middle of the street, blowing their whistles and wildly waving their arms. That was then…

We moved about a quarter of a mile on Wednesday, and into an entirely different world.

I think you’ll have to double click on this photo to get a perspective.

The white trailer in the right hand corner is where the drilling crew stays (12 guys, two weeks on, two weeks off). You can sort of see the our big green septic tank just in front of the tree on the right. We’re maybe 8 yards from the actual pad. It’s an unusual location. We’re sandwiched in between the guys and the rig. They walk on and wave.

It’s certainly quite a view! We’ve been close before, but never this close. If we were any closer, they’d have to issue us hard hats and protective clothing!

For those of you who read Fork for stories of pigs on pokes and cows on the carpet, there will be more of those to come. In this business, it’s pretty unusual to be quite this close to the action, so I’ll likely do another post with just photos, then it’s on to the tale of the three tails.