There is a child in every one of us who is still a trick-or-treater looking for a brightly-lit front porch. ~Robert Brault

This is my second Halloween as a TSA deep in the heart of an unnamed location. Later on today we’ll be passing out candy to the boys, who don’t wear costumes, and we’ll bake some colorful cupcakes.

Last year, we were in the midst of a drought down here in the south and there wasn’t a pumpkin to be found! This year, while not plentiful, a few popped up at the grocery store and Walmart.

For some reason, I like to carve pumpkins. I don’t know why since I have no artistic ability and I insist on drawing my own faces, even though they aren’t cool and artsie like most of the stenciled pumpkins nowadays.

SAH has no interest in this activity but she puts up with me, just like my love for coloring eggs at Easter. She was very kind about procuring my pumpkins and even had the stock boy dig through dozens to find two that still had stems.

I thought about a week ahead seemed like good timing for pumpkin carving. 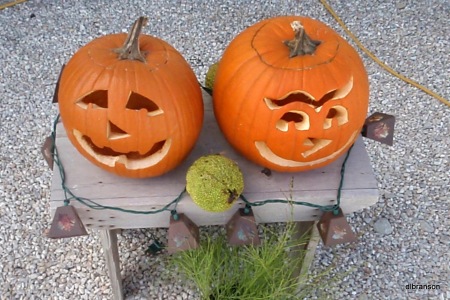 I was wrong. For starters, when I cut them open they were empty – really. Just a few seeds and strings. I don’t now if they have a different strain of pumpkins here in the Big state or if these two were just malnourished. It did make the scooping out go a lot faster, though.

They look pretty regular for the first few nights.

Then, they began to simply fall in on themselves.

I think they’re only a day or two away from squishy.

They’ve gone from grinning to ghoulish – not by design. Just by inertia. Today’s pumpkins will be tomorrow cattle fodder.

May Jack-o-lanterns burning bright
Of soft and golden hue
Pierce through the future’s veil and show
What fate now holds for you.
~Author Unknown

Maybe not so much with these fellows…