What is the course and drift of your compact?
~William Shakespeare, The Comedy of Errors

It seems our course has run somewhat adrift of late. Picking up where I left off last time, I’m still on the rebound from the fluke of a non-flu bug. I think that I might have been nearly well yesterday, if not for another unfortunate chain of events. 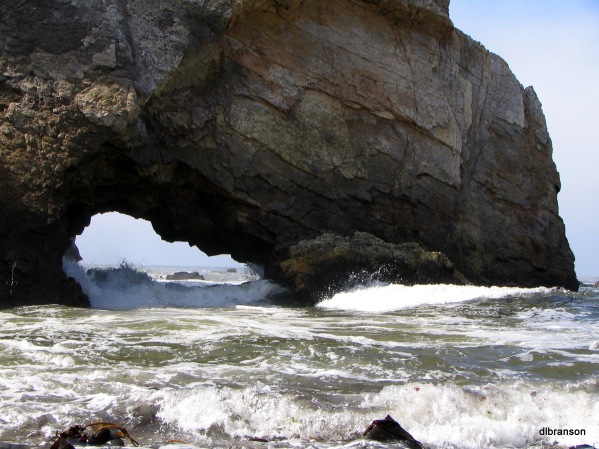 I broke my toe once. I was on a beach in California looking for sea glass. I ran away from a wave right into a rock. I broke my 2nd toe which took the brunt of the hit because it’s longer, if not bigger, than my big toe. I share this only to preface what’s about to follow. Stubbing a toe which sticks out anyway, particularly underwater, seems understandable. What’s happened here, maybe a little less so.

By the way, it was a beautiful beach and I did find tons of sea/beach glass. If you’re terribly bored and are inclined to hunt, there are 15 obvious pieces of sea glass in this photo (green, brown, clear and blue). 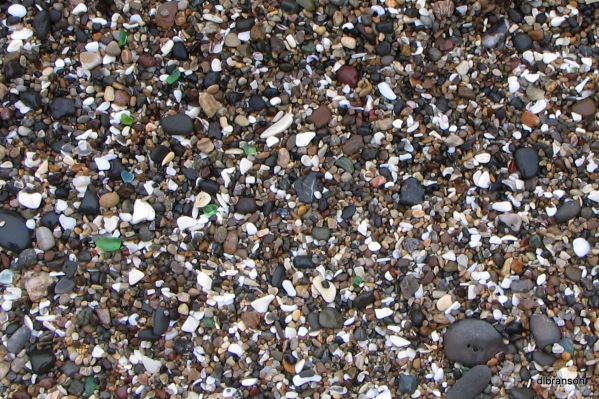 The first time Heidi broke her toe, her little toe (this was years ago) she was at my house helping in the kitchen and she ran into my foot. At her request, I took her to the E.R. where the Dr pushed in back in place and taped it up. As it turns out, there’s not much else to be done with broken toes.

The next time she broke her toe – the same one – she was coming up her basement steps and somehow caught her little toe that doesn’t stick out at all on the step and broke it. She called me. I went over and, in an attempt to help, I accidentally set it by grabbing her foot too hard. She hollered and then I taped it up.

Every why hath a wherefore. ~ William Shakespeare, The Comedy of Errors

Although I’m not questioning the words of the bard, night before last when Heidi broke her toe – same one again – going up the steps (inside), I began to wonder about the why and wherefore. Somehow, she snagged it on the step, even though her little toe still doesn’t stick out at all, or didn’t until then. Not appreciating my last effort, she decided to set it herself. She hollered (only a little) this time and I taped it up.

She went to bed with her toes taped and wrapped in an icepack. Yesterday, predictably, business was booming which meant quite a bit of foot time for Heidi. I got up early to help. I worked while she kept her foot up and cold-packed.

There should have been nothing to it since I was just baking fish.

I’m not sure what happened. I think I forgot that I’d pushed the magic button that transforms the microwave into convection. The timer beeped. The fish was ready and I brushed my hand against the side of the convected-micro and fried it. 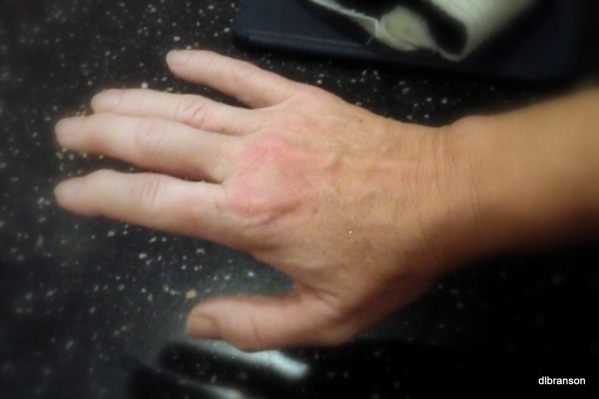 Heidi had discarded the icepack by then, so after some cold water and burn spray, I stuffed it with little baggies of frozen Ragu because cold-pack was warm.

I’m pretty stoic when it comes to pain so I was surprised by just how much the burn hurt. I was even more surprised when, a little while later, I looked down to see blood trickling down my arm. It hurt, but I didn’t think it hurt that much.

The thing about baggies of frozen Ragu is that they thaw pretty quickly when your hand is on fire. I was in such a rush to cram something in the ice-pack wrap before Heidi hopped up and hurt another toe that I didn’t notice they weren’t in a freezer bags.

Upon closer examination, I realized that it was Ragu, not blood, trickling in a sticky sweet line down my arm. While I was washing up, Heidi ended up hobbling over after all and found a bag of peas which worked much better.

For some reason all this excitement reignited my diminishing flu systems which left me in the bathroom and Heidi with no choice but to tromp in and out with her taped up toes and sandals (even though everyone else is wearing parkas again).

By 8:30, she was sleeping, the wind was roaring and the newly promoted SA Henry VIII had taken the helm. He’s unflappable under pressure and has yet to break a dewclaw or burn a whisker.

Yet this my comfort: when your words are done,
My woes end likewise with the evening sun.
― William Shakespeare, The Comedy of Errors

I wrote this early this a.m.  Because some of you are given to worrying I wanted to wait to publish until I could add a health update:

Heidi’s toe is healing nicely and it barely hurts at all.

After a night of burn spray and peas and a day of sleep, my hand is healing nicely and it barely hurts at all.

The entire misadventure has worn Henry out. He’s sleeping in front of the fake fireplace, relieved of all Secret Agent responsibilities, and he barely remembers any of it at all. 😉

35 thoughts on “A Very Un-Shakespearean Comedy of Errors”

Leave a Reply to Your friend Sue Cancel reply