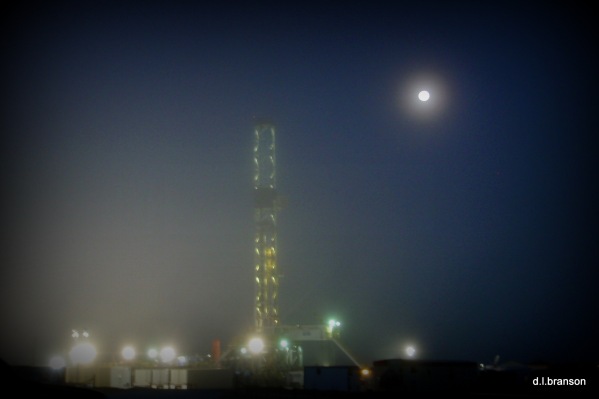 Lee used to bring me chicken at midnight.

When I got up Monday afternoon, Heidi said: Our kids and grand-kids are all OK. The rest of the family is OK and everyone here on the rig is OK but I have some sad news. Lee was killed last week.

I’d been watching for him for several nights. I’d already set aside the peanut brittle I was going to give him.

Lee was a pusher (field supervisor) for a company that we’ve worked with for the past year and a half. I talked to him almost every week, sometimes several times a week. We work with so many nice guys, but he stood out. Lee wasn’t unusually handsome or charismatic. Lee stood out because he was unusually kind.

He was always worried about my torn meniscus.  He’d jump out of his truck to meet me on the RV steps so I wouldn’t have to make the climb. When it rained, he’d race to the door to make sure he was the one who got wet.

Lee would check out our next location before we even knew where we were headed. On his own time, he’d drive the torn up Texas back-roads to find the route that would cause the least amount of rocking and rolling to our RV. The glove compartment is stilled stuffed with his hand drawn maps.

Lee was only 45 years old when another driver crossed the center line and hit him head on. He wasn’t even supposed to be there. Like me, Lee works nights and his shift  was over. Typically, he volunteered to make one last run to save David the long drive out.

David’s face fell when he told Heidi the news.  Everyone is sad. Everyone says the same thing: He was a very good man. Unanimous praise is rare in this industry.

Someone new just came in a few moments ago, with Lee’s plate on his truck. I felt my gut synch-up as I wrote down HN6 and asked him how he was. He said: I’d be better if I didn’t have to be here.

He may be nice enough. I don’t know. I only know he isn’t Lee.  I was thankful to make it through Be safe and have a good night before my throat closed up. Tears were flooding my face as his tail lights faded.

The nights down here are quiet and sometimes lonely and I’ve truly lost a friend. There won’t be any more gifts of chicken at midnight.

Be kind. Be kind all of the time because there may not be another time.