We’re walkn’ in high cotton, which is actually pretty short, but its high cotton all the same. Now this is a surprise to me because I didn’t know (before moving south) that cotton was grown in Texas.

Guess which state in the nation grows the most cotton?

Texas, whose 3-year average production was over 6.2 million bales of cotton for the years 2006 through 2008, is the leading cotton-producing state. ~ National Cotton Council of America

So yes, there’s more than a little cotton down here and I expect we were bound to end up sittin’ in the middle of it sometime. And so we have!

I blame my lack of knowledge regarding Texas and cotton on Mr Brokaw, CCR and Alabama. Mr. Brokaw was my high school History and Geography teacher. He was also the assistant football coach. We mostly learned about the history of football.

A bale of cotton weighs about 500 pounds. ~ NCCA 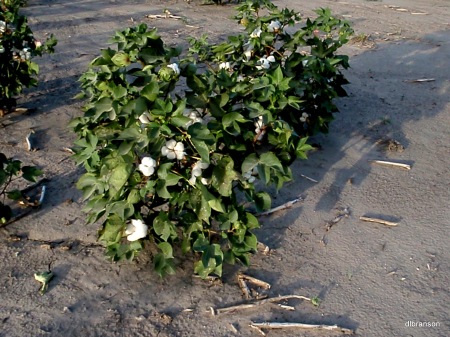 If I’m going to be totally forthcoming, much of my particular view of geography and history comes from the fact that most of the ‘facts’ I remember are lyrics spinning in my weirdly wired jukebox brain. I can’t think about cotton (the look … the feel… the fabric of our lives) without a jingle or a song playing in my head.

I was influenced a lot by those around me – there was a lot of singing that went on in the cotton fields. ~ Willie Nelson 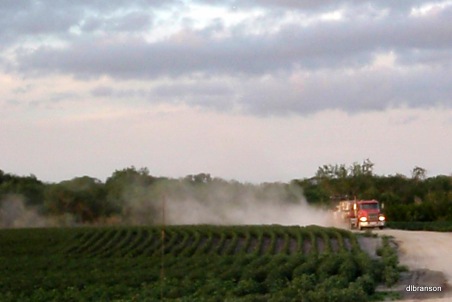 And I can’t look out the window without thinking about cotton so my brain’s a’ hummin’. Sometimes it’s Creedance Clearwater Revival singing about the Cotton Fields of Louisiana.

But most of the time the tune that’s playing as the current soundtrack to my life is Alabama singing High Cotton. It’s a look back at the good life in Alabama and not really about cotton, apart from the high reference, but I like it the best anyway.

And I love this video. It’s one of those click on the button to fill the screen and sit back and be grateful videos.You don’t have to be  a fan of country music to enjoy it!

We are so walkin’ in High Cotton!

Hard to beat all that! High Cotton, for sure! 😀

The immature flower bud on a cotton plant is called a square. ~ University of Arkansas, Division of Agriculture

Go figure. They look round, kind of like walnuts, to me. But then again, I’m the one who didn’t know there were cotton crops in Texas so who am I to say. 😀

I see the bad moon arising.
I see trouble on the way.
I see earthquakes and lightnin’.
I see bad times today.

Don’t go around tonight,
Well, it’s bound to take your life,
There’s a bad moon on the rise.

Do you remember this CCR classic? I was 13 when Bad Moon Rising hit the charts in 1969. If you follow Fork, you know that I really love the moon (Good Night Moon, I See the Moon and the Moon Sees Me etc…).

As a gate guard, working the night shift, the moon is my friend. Or so I thought.

To establish the setting, after 7 days in Smiley, my alien giant botanical plants continue to flourish. The temperature had finally dropped from 106 to a ‘cool’ 91 just after midnight. In this particular part of Texas it’s really humid, unlike up in the panhandle. The Lantern 17 guys who just moved down from there are really struggling with the humidity.

The moon is full and beautiful right now. The coyotes seem to engage in nightly ritual of approach avoidance behavior. The barking and howling comes near and then stops. A little while later, faintly in the distance, it picks back up. Stops. And then resumes, very near again.

Adding howling and humidity to the heat makes caliche clogging a little less appealing than I may have made it sound, although it is more practical, logistically, than Pole Dancing or Zumba. When the temperature dropped again to a cool 88 degrees around 1:30, I decided to get my clogging in early.

The last of the guys were back on site from their pilgrimage to the small WalMart and H.E.B.  in Gonzales. The coyotes were doing their distant howl so the timing seemed right.

I stepped outside and headed toward the gate. One at a time, these giant alien plant forms began to bend over and then rise back up. At first I thought I was just imagining it as I stood, transfixed, staring in the moonlight. Then they began to bend in pairs. Disappearing and suddenly springing up as the next set bowed.

It would have been a little less disconcerting if the motion had been one of retreat. But just like in a horror flick, whatever it was, seemed to be on a course that would end with me. At that point, having emotions that ran stronger than my curiosity, I began walking backwards toward the RV. I’ve seen Little Shop of Horrors. I know to never turn your back on animated plants.

When I backed into the little wooden table and Harvey, the not invisible Pooka, rattled to the ground, the plants froze in place. I left Harvey to keep his lateral sentinel watch, slipped (literally) into the RV, locked the door and explained to Henry that the door would remain locked until dawn so there would be no drinking from the water bowl on full moon nights between the hours of midnight and 6:00 a.m.