The older I get, the more necessary it becomes to learn to roll with it.

I was pretty athletic when I was younger getting straight A+’s in P.E. in every unit except gymnastics. I wasn’t flexible. I’d Run, Tuck and Splat Out Flat. I never did get the Roll part down. I’d just thump over onto my back.

In the past several years, my athleticism seems to have left me. I now tip over so often. I’ve had to learn to roll to prevent seriously damaging any one single section of my body.

In my life as a Top Secret Agent, being able to roll with things is crucial. I can’t tell you what things because they’re secret so you can just make some up!

Here’s a visual. It has nothing to do with my TSA job or with rolling with it, but Heidi did make rolls  today and the RV still smells like fresh bread! 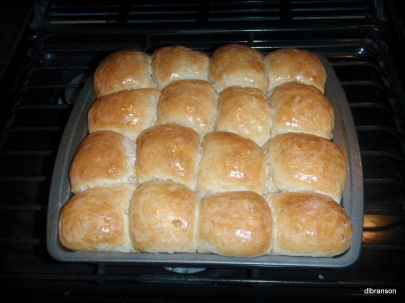 Which would be a grand thing if I could eat any.

I won’t because I’m still on a diet. And yes, I did say diet. No I didn’t say a I’m on a quest to learn how to eat healthier.  I’ve always known how to do that. Pretty much everyone knows that.

The word Diet has become very un-PC, even to the diet industry. Funny. Pretending I’m not dieting would be like that word game where I say I don’t have problems, I just have opportunities. That’s one of those motivational sayings that was made up to sell books and posters. Of course I have problems. We all have problems. And I really am on a diet.
I’ve had a bit of success with this diet thing and I’ll write about that soon, but tonight I’m just concentrating on rolling.

Back to vacation – no worries, Fork isn’t going to turn into a travelogue – I just have a couple more stories to share. Vacations require a different set of rolling skills. For me it means being awake in the daytime and sleeping at night, which plays havoc with the cogs in my TSA clockwork. Since a segment of this past trip involved a cruise, some rolling was automatically attached.

We successfully joined up with our luggage and my cousin T and her husband B (sticking with code) to begin our all expense paid vacation that we’d won (like the 6 cruises before this one) by virtue of the Generous Cousin Foundation. 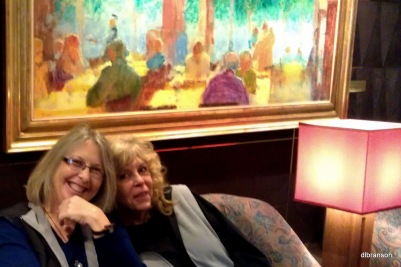 Me and T before things went bad

We stayed at The Edgewater Thursday night, just down the street from Pikes’s Market. It’s built entirely on a pier – but it didn’t roll. 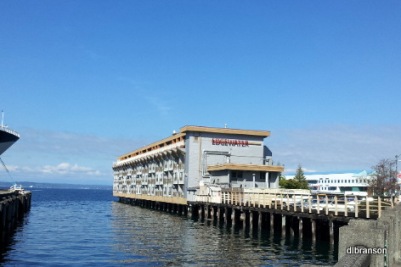 Definitely not Sleepless in Seattle at The Edgewater

In addition to being on a pier, which is very cool, it’s famous because The Beatles fished off the balcony of their room when they stayed there. 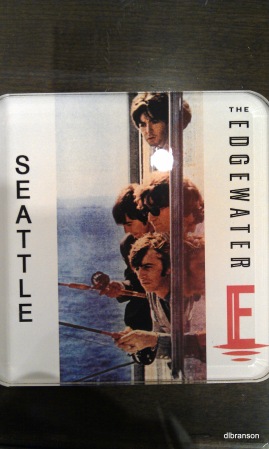 I have no idea if they caught anything? Probably not – but it sure made for a great photo opp!

We boarded the ship Friday afternoon feeling full of anticipation and optimism.

Heidi  is all happy here because she had no idea what I was about to do to us.

We sailed away out of Seattle’s beautiful harbor.

We met our cabin stewards, Wala and Jocko. This was the tipping point – literally and figuratively. I’ll be coming back to this moment in the next post. We had a lovely dinner and everything was pretty perfect. We slept to the soft sounds of the ocean and woke up Saturday to rolling seas.

Heidi starting feeling sick right away. She’s a little prone to motion sickness. She tried all the conventional cures – Bonine, ginger, sleep, tea, Tums etc… but she kept getting worse. A half a Bonine (I assumed named for My Bonnie Lies Over the Ocean – sick at her stomach) and she’s  usually good to go. Not this time.

Saturday was an At Sea day (no port – Tracy Arms Glacier).

By noon, I wasn’t feeling too well either and I’m a Tilt-A Whirl kind of girl. I love motion!

In my TSA job, I never drink the water. TSA’s all know better than to drink tap water (we never know what might live in it). I had been drinking tap water (because it’s free) on the trip. We diagnosed Heidi with seasickness and me with tap-water-sickness.

H spent most of the day on the veranda sleeping and glacier gazing.

My view of Icy Straits from my vantage point on the sofa. (If you ever take a cruise, spring for a veranda. It’s so worth it! Thank you, T!)

We were glad for the At Sea day to recover since the next day held the promise of a Float Plane Bear Hunting trip in Juneau. I had no idea that things were about to go from not so good to really bad, all because I was trying to be polite.