Today Heidi thought it would be a good idea to start through What Color is Your Parachute with me. The general purpose seems to be to determine your  strengths to help you professionally and narrow down your geographical preferences. At least that’s as far as we got today.

It struck me as a pretty funny thing to do when we’re in the middle of my very least desirable geography and doing a job that takes zero skills. Anyway, Heidi went through the study a few years ago and really loved it and we live in a small space so it seemed like a good idea to go along.

No real surprises in the professional realm. I have a pretty narrow list area of interests and strengths. The surprise was in the criteria for location. Removing family and friends from the equation, you’re suppose to list 5 or 6 priorities in relation to your  ‘ideal’  location. Some things made the list that I knew would be there, things like living near water, preferably the ocean, a moderate climate etc…

It’s a funny place we live in. Today the rancher wanted the gate left open while he drove around dropping corn out of the back of his pickup from a hopper, hoping to entice the big “access” buck with large white spots to come onto the ranch (presumably to shoot, maybe to use in the Rent-a- Buck program. Didn’t happen.

Might as well start out by stating the obvious. I’m writing so, no, the air card doesn’t work with only one bar. Tech support said we’re so far from a tower (18 miles doesn’t sound like that far, but it must be a long way in internet waves). They’re amazed we can use our phones a little.

Most of the traffic has passed on by today. It’s been a quiet day on the ranch. 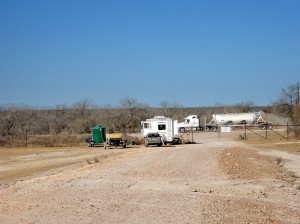 Ranch being an really important concept, not to be confused with farm. On a farm you grow corn and try to keep the deer out. On this ranch, they grow corn to draw the deer in and to plump them up like those Tyson Chicken commercials. 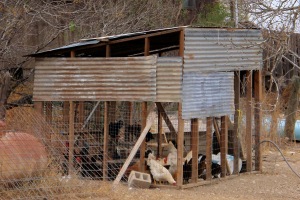 Theses are actually Tilden chicken, not Tyson chickens. I pass them on the way to the dump.

Actually, it seems more like the witch’s gingerbread house in Hansel and Gretel. There are corn feeders and salt licks strategically placed near the blinds, where the hunters sit and wait for company. It’s been a highly charged afternoon. 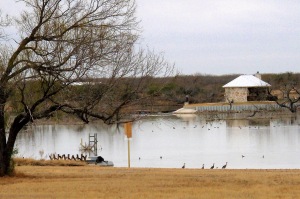 A ranch hand filled me in on a few of the details. While anyone with a license can hunt on some ranches for $1500 a day and up, our rancher only lets his friends, his family and his attorneys pay to hunt here.

In Cedar Rapids, the deer population has become so invasive that flower gardening is impossible in many neighborhoods right in the city and hitting a deer while driving at night is more likely than hitting a patch of ice in the winter. Iowans are continually debating about the most humane way to thin the herd some.

In Oregon, people still take pictures of a buck or a doe. Hunting is popular albeit very short season.

In Texas, they fence off areas on the ranches app. the size of a football field and go to Rent-A-Buck. For between $30,000 and $50,000, you can procure the services of a perfect buck to put in the field with around 20 doe.

The seasonal limit for buck is 5, no one cares much about the doe, since it’s trophy mounting, not eating that’s the motivation. It explains a lot about Max’s Motel and Café!