We’re getting ready to skid over to drill a second hole sometime next week, so there’s not a lot of activity. There’s also been NO connectivity. Even though we have both AT&T and Verizon air cards, the internet seems to go down with the sun each evening. 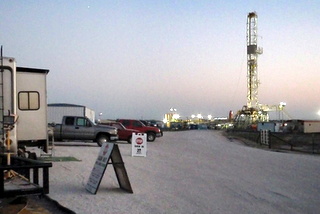 We’re still in the same spot, somewhere south of Kenedy (not misspelled – just one n – Texas is a red state, y’all). We’re maybe 150 feet from the rig. I’m really not much better with feet and yards than I am with north and south so that may be way off but, as you can tell from this photo, we’re close.

Our RV is in the left front, then the rough-necks trailer and then it’s time for a hardhat. We’re sitting in pea gravel. To a gate guard, pea gravel is pad heaven. No caliche! Well, that’s not entirely true, there’s always caliche, but it’s on the road, not under us!

The picture below is rather remarkable. I took it a few days ago when we had clouds. We almost never have clouds.

No matter which side of life she was looking at, Judy Collins would have nothing to sing about if she lived between Beeville and Kenedy. Except possibly, next week if Tropical Storm Debby (don’t you hate it when they name something destructive after you – at least they spelled it wrong) takes the path predicted and turns away from Florida, landing here about Thursday.

Just a reminder, in the right margin, you can always check your weather at Weather Wunderground or track Hurricanes and Tropical Storms by clicking on the live links.

One of the guys came by to pick up our garbage. Heidi was asleep and I don’t know where she keeps it. I know, how could I not know that? There doesn’t seem to be any anywhere. 😀

It’s probably bagged up in the truck but I didn’t want to make him wait. It’s that or the shoemaker’s elves. I did get a partial picture out of the right to your door service. Sorry I cut off the forks which, of course, is where the garbage goes.

Since moving to Texas we’ve spent a surprising amount of time with cows. I don’t have a farming background. My Mom grew up on a farm, but I’m more of a town/city girl.

What makes the picture below rare is that this cow was actually on the other side of a fence from us. Normally, we just share the space, so I’m getting to know a lot more about cows.

This cow is a good example. I stopped to take a picture because she was just wandering along the side of the road. She walked right up and licked the truck.

There doesn’t seem to be an unappealing part of our service wagons.

The picture below was taken when we were in that really weird patch of 8 foot tall weeds last fall. I think this is where Heidi mastered the art of throwing water on the cows (calves) since they were bent on eating our satellite.

In the end, we bent it ourselves. In a missed relay from me to Heidi to the ground and it fell on its nose. We now have the little dome kind that finds the settings for you and is impervious, so far, to cow licking. Which is kind of surprising because it looks a whole lot like the salt licks we used to have back home.

As apparently so do I (look like a salt lick).

Those of you who’ve been reading for a while, know about the night I tried to open the door to check out the constant whacking sound and it wouldn’t budge.

When I finally got it open there were cows and calves everywhere – swatting flies and the RV at the same time.

I literally tumbled onto one. Although he was temporarily startled, I was soon surrounded and received some serious licking. I had my camera in my pocket. I have no idea why I thought this was a great photo-op moment.

The little bit of white in the bottom of the picture is my t-shirt – clearly salt-lick looking.

Their joy came to a halt when I had to wrestle the lawn chair away from one and the leather tire cover away from a particularly hungry guy.

I took this photo yesterday. I’ve heard of people keeping goats so they don’t have to mow. Our neighbors have gone Texas BIG and substituted cows for goats! No mowing, just mooing!

Notice the open gate in the above picture. It’s not at all unusual to have to pull over and wait to see why the cows crossed the road.

She always says, my lord, that facts are like cows. If you look them in the face hard enough they generally run away. ~ Dorothy L. Sayers

Dorothy Sayers was a great writer who clearly didn’t cross the pond to hang out with Texas cows.

Some people talk to animals. Not many listen though. That’s the problem. ~ A.A. Milne

When the bulls talk, we listen. There were 3 (although you can only see one in this video. There was another behind him and one across the road – not fenced in of course. We asked the rancher (this was a while back) if we needed to be worried since the not-fenced-in-bull hung out right outside of our RV.
Apparently they were all three trying to impress the lady cows, so Yep.
~

Greatness alone in not enough, or the cow would outrun the hare.  ~Proverb

All is not butter that comes from the cow.  ~Proverb

I now know this to be a fact.