Reading this blog  must be akin to being a spectator, standing in the middle of a racquetball court. You never know which wall the ball is going to come flying off of! I get it. I’ve got the racquet and I can’t see it coming either!

I was hoping that I’d find my voice, develop a steady style and land in some niche somewhere. I don’t see that happening.

I’m resigned to the fact that I have eclectic interests. In this past week, I’ve written about: Mighty Mouse, the Moon, Shaving in the Shower, Tarantulas, Blogging and Drilling a Well. It’s no wonder someone typed never turn fool at the fork in the road yesterday in their search engine and landed in an oil well in Texas! I added a new category tonight: You Betcha! for posts like this one that even I can’t tag.

I hadn’t planned on writing tonight. That all changed over a jar of Creamy Jiffy Peanut Butter. Heidi bought creamy by mistake. 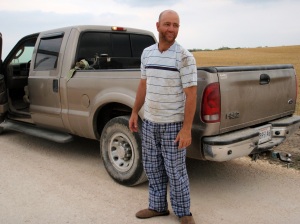 Ron is one of our drillers.

Not only did he share his crock pot tarantulas, he also gave us a sack of squash that he brought back from his garden at home in Louisiana.

I stopped him on his way back in from town to see if he wanted the PB. He took it, drove a few yards and then backed right back up.

Look what’s in the road, he says. Maybe he’s a tarantula magnet?

Of course, it could be me. There was that incident with the tiger shark in Oregon.

I came inside, grabbed my camera and started taking pictures, which is semi-remarkable since I’m rather terrified of spiders in general, even real little ones.

This particular tarantula was not only photogenic but seemed to be interested in establishing a relationship. I walked toward him and he rushed happily up to greet me. I thought they were suppose to be shy?

Photo op complete, it became apparent he had designs on the RV. Heidi strongly objected.

Ron, knowing that arachnophobs like me, don’t bond well with arachnids, jumped out of his truck, got a can and scoped him up.Sorry for the poor photography. It wasn’t my finest moment.

About an hour later, Ron made another trip to town. When he came backed, he pulled up and shut his engine off. If you’ve been following Fork, you know what that means. I’ve learned to just come back inside and get my camera before I even ask.

I knew you’d want to see this, he says.

As we were examining the snake, 2 scorpions scurried around his feet. One crawled into his slipper which he promptly kicked off his foot, straight at me (he apologized later).

We move to a new site tomorrow. It’s only 4 miles away. However, it’s not in a wheat field. I’m hoping our menagerie here is partial to wheat. I’m writing this at 10:30 pm. That means I have 8 more hours of darkness ahead and many trips to make out to the road.

All this time I thought the rustling I heard was the wheat blowing in the wind, even on the nights there wasn’t any wind. Now I know better.

I promise this is the last post with spider pictures unless I see one as big as a dinner plate (like my Sis did in her driveway in Tuscon). For a change of pace, I plan on writing on grief tomorrow night, of course, that could change.

Be prepared to duck!