I don’t feel like myself tonight. Isn’t that an odd saying? It’s not like I feel like someone else. I’m not exactly sick or entirely well. I guess I’m just a little more off than usual, so I promise to keep this short.

We had company yesterday! I think you might have to be a gate guard in real rural Texas and have nearly all your friends and family 1200 – 2200 miles away to really appreciate how wonderful it is to get company!

On a few rare occasions, we’ve had an opportunity to meet other gate guards, which has been great fun! And we’ve had tons of company with multiple legs, which I’ll write more about, another time.

But yesterday, people who already know us, came to see us on purpose! 🙂

We met Mike and Casey in  Oregon where we were workampers together. Mike converted our gas- only water heater to give us an electric option in the Class A. They taught us how to tie down our awning and then taught us to never put out the awning on the Oregon coast unless we wanted to go para-sailing!

We were new to RVing, new to workamping, new to the coast; which is just a nice way of saying we didn’t know anything and they taught us everything! We were so poor, they even bought us a space heater. You’ve gotta love folks who keep you warm and keep you laughing! Thank you so much, dear friends, for spending 7 hours in the car to spend 4 hours with us today!

I’m not sure what Mike and Heidi talked about while Casey and I walked Buttons and Henry, but I could tell things were different after they left.

We played cards, as we do almost every night. But it wasn’t cards as usual. Maybe that’s why I don’t quite feel like myself? We generally always (yes, that’s how they say it down here) play 2 hands of Whist, 2 hands of Gin Rummy and 1 game of Cribbage.

I don’t mean to, it just happens. That fact that Heidi’s only been playing cards for about 4 years and I’ve been playing cards since I was 4, may be a factor. Anyway, I think Mike must have given her a pep talk. She won tonight! In my defense, it’s hard to maintain any strategy with a gun in your face. Just sayin’. 😉

To celebrate her massive card annihilation, we watched Heidi’s favorite TV show: Swamp People. Ever since our trip to Louisiana  and our wild air boat ride through the Bayou, she loves to watch Swamp People and yell out Shoot him! which I’ve gotten used to but still startles Henry. The shooting is a reference to the alligator, not to a person, but that’s a story for a night when I feel more like myself. 😀 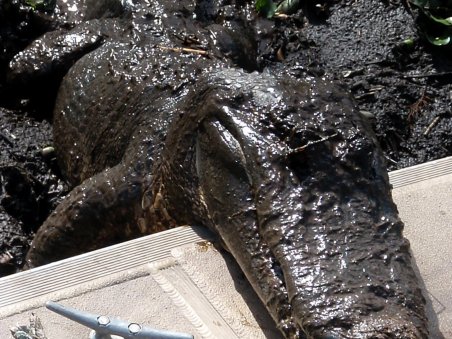 This 10 footer was about a foot from my foot. My toes haven’t felt quite the same since…

Six degrees of separation refers to the concept that everyone is somehow only six steps away, by way of introduction, from any other person on Earth. It’s a theory that I’ve been re-examining this week.

Last night a guy pulled up at the gate and asked me if I’m from Canada?

He said: You know y’all have that Canadian accent. Hmm…

I said: I grew up in Indiana.

He said: Hey, I’ve got kin that go to some Amish swap meet thing in Shipshewana? You ever been? 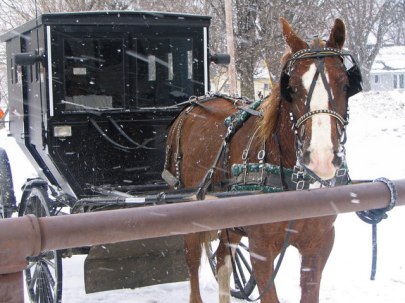 I said: That started after I moved away but I used to go to the dentist there.

(Really? Someone in Westhoff, Texas has heard of Shipshewana, which had a population of 300 back in the 60’s!)

I grew up about 7 miles away in Middlebury. I was looking at a manual for the RV, only to find some parts were made in Middlebury! The RV, which we bought in Iowa, was made in Elkhart, where I was born (Middlebury didn’t have a hospital).

As you know, we also bought a truck from the Iowa RV dealership. The truck was originally purchased, brand new in 2006, in Texas and traded in for a Class C in Iowa. It still has a Longhorn emblem on the back window. Really, we drove 1250 miles from Texas to Iowa to buy a truck from Texas!

I read a wide variety of blogs. I’ve been following an interesting exchange between a Mel who went to high school in Iowa City, but now lives just outside Chicago, (where my daughter-in-law is from); and Jen, who lives in Colorado, and went to the Writer’s Workshop at the University of Iowa.

They’ve been talking about Hayden Fry, former football coach and the inspiration of the TV show Coach, and the Hawkeyes of  the Universityof Iowa, where my daughter had her dental implants done and my son got his PhD.

My son is now a professor at a college in New Jersey. My new blogging friend, Ruth, writes about New Jersey and sent me regular updates on the weather when Hurricane Irene hit NJ in August.

Last night I turned on TV about 2 a.m. and Little Shop of Horrors was playing. This was the musical my son kept begging the drama coach to produce so he could play Seymour. When I turned it on, Steve Martin was singing I Am a Dentist – no kidding!

Yesterday, Heidi went to Nixon to have a wisdom  tooth pulled by a dentist who hopes to retire just north of the California border on the southern Oregon coast, where Heidi and Henry and I lived for 3 years before coming to Texas last December.

My family drove through Gold Beach in 1962 on our way from Indiana to California to visit my cousin Trudy and her Mom and Dad. 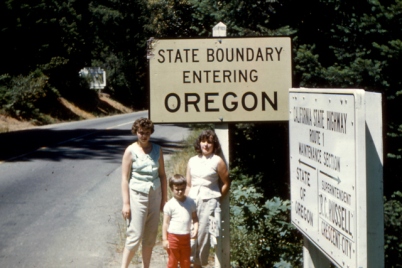 My sister, me and exchange student from Germany

I couldn’t wait to go to Disneyland! It’s a Small World! That also happens to be my cousins’ favorite spot in Disneyland.

I’m going to spend Thanksgiving with Trudy in New Orleans this year.

When I got up yesterday, Heidi, who rarely watches  TV, was listening to a channel called BEST, which appears to be a continuous advertisement for the  TIME LIFE Country music CD collection of 158 classic hits from the 50’s and 60’s.

The song that was playing when I got up was El Paso by Marty Robbins. When I turned it off  the song of the moment was The Battle of New Orleans by Johnny Horton.

And there you have it… a small world connected by teeth and blogs and song.

You’ve probably seen this video, it’s been floating around You Tube and FB for a long time, but it’s true, It’s a Small World After All. 😀

I grew up in a world of cartoon superheros.

Casper the Friendly Ghost vs The Ghostly Trio

Mighty Mouse vs Oil Can Harry

They didn’t have  girl superheros when I was of cartoon age. I wanted to grow up and save the day like Mighty Mouse, but in Casper style. I wanted to save the day, sweetly. Maybe that’s why I was drawn to counseling. I’ve worked in Corrections and at Crisis and Counseling Centers. I particularly loved the 20 years I spent on the road as a trainer and public speaker. Through all of that though, it became techno-color clear that saving the day is beyond my non-super human powers.

My focus now is on saving the moment.

In Oregon, I was a manager at a beautiful resort on the southern coast. My job was to keep people happy. Staff or guests, it was a mix of problem-solving, counseling and placating.

After work, Henry and I often headed the 120 yards to the beach.

With no leash law, Henry was in heaven, chasing gulls and playing tags with the surf. It was during a beautiful evening of romp and stomp that I saw the lovely couple from Australia I’d met earlier at the resort.

The husband called out me: Hurry! You have to save him!

My heart started racing. It’s called the Wild Oregon Coast for a reason! The waves are mighty and the water’s always cold. No one could last long, tumbling in that tide.

I can swim well enough to save myself in a swimming pool. I float really well so I could survive a long time in a lake. But my glorified dog-paddle isn’t well suited to the high seas.

Run, You have to save him!

I rushed to the spot where his wife was staring at the surf. Suddenly he was there, thrashing at my feet and then pulled back out on the next wave.

I knew it was too late, but that was a truth they weren’t ready to hear. I rolled up my jeans and waded out into the surf. I picked up the young, dying tiger shark by his tail and flung him as far as I could. Nearly 3 feet long and heavy, I only managed to clear the next wave.

Henry, the elderly couple and I watched as he washed ashore, 5 waves later. I looked at their faces and said, I just didn’t get him out far enough. They were having such a good vacation. I wanted to save the moment.

This time I carried him out until the waves were breaking about mid-belly. I adjusted my grip as he struggled to get free, staying clear of his teeth as I gave him a mighty hurl. The tide was going out so I figured this would buy about 5 minutes.

The couple held hands as they watched and waited. I knew it was only a matter of waves before he returned. Just as I was preparing to share the facts of life with them, they smiled and hugged me as if I were their real life hero.

Thanking me for saving their vacation, they walked back up the path to the resort. I rolled down my sea soaked jeans and watched the sun begin its slide when a familiar voice called out Hey Debbie! I want you to meet my grandson!

The grandson streaked past me crying: Grandpa, hurry, you gotta save this shark! Clayton has lived in Oregon a long time. He knew. But his grandson was visiting from Nebraska. They’d just stopped for a quick peek at the ocean before dinner. I looked at Clayton’s expensive loafers and the classy-casual clothes. 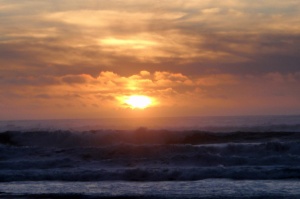 I looked at my already soggy, sandy self and said: Maybe I can help him clear the breakers. Clayton smiled. His grandson smiled. I didn’t bother to roll up my jeans.

I picked up my shark and once again rode the waves out and set him free. By the time I got back on the beach, the guys were beaming and heading for the restaurant.

As the sun finally dropped into the ocean, I was reminded that I may have to get my more than my feet wet to save the moment. And to be honest, there are times when I don’t want to make the effort.

Gate guarding in southern Texas, my feet, along with everything else, stay dry. Here, I have to be willing to swallow a little grit. It’s so much simpler than saving sharks. You’d think it would always come naturally but it doesn’t. I know I’m losing perspective when people become an interruption. All it takes at the gate is a smile, a few kind words and an occasional brownie. I’ll never save the day, but once in a while, I get the chance to save the moment. When I take it, it’s always worth it.